Betty de Rothschild bought the land in Cannes on which to build a villa from Mme Pesron for FF360,000 in 1881, acquiring more parcels of land over the next two years.

It was the first time that one of the family had chosen a site on the southern French coast.  She commissioned a local architect Charles Baron to build the house in 1882.  The resulting classical villa was similar in spirit to the châteaux at Boulogne and Ferrières.  The park was in fact modelled on that of Ferrières, and included many exotic plants.

Betty spent the last years of her life at the villa, and left it at her death to her eldest son, Alphonse.  In time, it passed to Alphonse’s son Edouard, and here he and his young family regularly spent some weeks at the end of the winter, later adding a few weeks in the summer to holiday there.

In 1952 the house was sold to the town of Cannes, and today houses the town library. 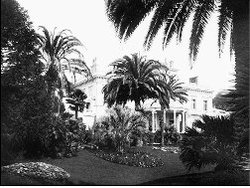