In 1877, Cyril Flower (1843-1907) married Constance, (1843-1931) daughter of Sir Anthony de Rothschild. They lived at Surrey House, London. Connaught Place was the second London residence of Lady Battersea; she moved there c.1910 after the death of her husband

Connaught Place was an elegant Georgian terrace of substantial mansions, in an unrivalled situation with south aspect over Hyde Park. Connaught Place was laid out c.1810, on open land which adjoined the Tyburn turnpike gates and the site of the Tyburn gibbet. An early resident at No.1, Connaught Place was Caroline, Princess of Wales, following her desertion by the Prince of Wales. Lord Randolph Churchill lived at No.2 Connaught Place from 1883-1892. No. 10 was in 1860 the residence of Sir Robert and Lady FitzWgram. Subsequent occupiers were the Countess of Guilford, the Dowager Countess of Rosse, and Walter Shoolbred, Esq.

Constance maintained her lease on the property until her death in 1931. 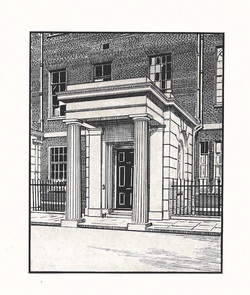