From 1953 until 1976, Elsfield Manor was the Oxford home of Miriam Rothschild, the noted zoologist and entomologist. It was at Elsfield that Miriam entertained many noted experts and academics.

The parish of Elsfield lies about 3 miles north-east of Oxford. Manor Barn on the Elsfield manor estate is believed to be the oldest building in Elsfield, pre-dating the Manor. During the Civil War, Oliver Cromwell stored cannon in the adjacent stable block, half of which now forms part of Manor Barn.

The Manor of Elsfield was owned by Sir George Pudsey until 1690, when it was sold to the North family. The present Manor house was largely the construction of the Reverend Francis Wise (b.1695), an antiquarian and  librarian at the Bodleian Library, who supplemented his income by giving tutorials; one of his first pupils was Francis North, and through this connection he acquired the living of Elsfield. He left his mark in Elsfield by building the Manor house and creating a series of ‘modern antiquities’ in the grounds, among which featured a ‘Roman’ altar, a water course and temple, and a cottage constructed to look like a medieval chantry. After his death, the house continued to be occupied by his sister, Mrs Margaret Wise, and after her, Dr Oglander, vicar of the Elsfield parish from 1784-1825. The Manor house and estate eventually passed to the Parsons family, who were bankers.

In 1919, the Parsons sold the estate to Christ Church College, Oxford, who split the Manor House from the esate, selling it, together with its attendant outbuildings and 20 acres of land to John Buchan, the writer, journalist, and diplomat. The garden inspired settings in his fiction, and during the 1920s and 1930s the family entertained a wide ranging circle of friends and correspondents including T.E. Lawrence, Robert Graves and Virginia Woolf.

John Buchan died in 1940, and in 1953, the Buchan family put the Manor house on the market, together with its accompanying land and cottages. Miriam Rothschild (Mrs George Lane) purchased Elsfield, in order that her children could attend school in Oxford a few miles away, and to provide herself with a convenient base close to Oxford for her scientific studies.

When she bought the Manor, a great deal of work was needed on both the house and its properties. Miriam moved into the Manor with her three children and her two wards. From the time of her arrival, Miriam cut an exotic figure in Elsfield, where she took farming and conservation extremely seriously. It is said that she would discuss the management of the land with her farmer and estate manager in her bedroom, where she also kept her collection of fleas in plastic bags so that the children wouldn’t disturb them; Miriam continued her father Charles' work on fleas and published extensively on the subject of Siphonaptera.

Miriam Rothschild sold Elsfield in 1976 to concentrate her work at Ashton Wold, the Northamptonshire estate she had inherited from her parents. Elsfield Manor house remained empty for several years, and was finally sold to a consortium of idealists, who created flats, residential studios and artists' workshops.

Today, the Manor house comprises three apartments within the house and two separate converted barns, owned by Elsfield Manor Ltd, which are privately leased. The family of Miriam Rothschild still own two cottages in Elsfield. 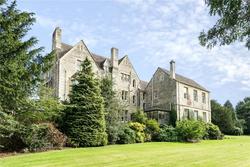