Woodwalton Fen is a 209 hectare biological Site of Special Scientific Interest west of Ramsey in Cambridgeshire.

One of the first nature reserves to be created in England, Woodwalton Fen was bought by Charles Rothschild (1877-1923) in 1910. Charles intended to present the site to the National Trust, but they declined, and it was kept initially as a private nature reserve with a bungalow for the owner to stay in.

Charles Rothschild was a pioneer of nature conservation. In May 1912, he held a meeting to discuss his radical idea about preserving natural wildlife habitats. His aim was to organise“persons interested in the preservation of the natural fauna and flora of the United Kingdom.” This meeting led to the formation of the Society for the Promotion of Nature Reserves (SPNR). In 1919, the Society acquired Woodwalton Fen as its first reserve.

The SPNR signalled the beginning of a UK nature conservation movement that continues today. The Society became the Royal Society of Wildlife Trusts, and Woodwalton Fen is now a National Nature Reserve managed by English Nature. Today Woodwalton Fen has one of the few remaining ranges of flora characteristic of the East Anglian Fens. There are rare fen plants such as fen wood-rush and fen violet, and ditches have uncommon aquatic plants including bladderwort and water violet. 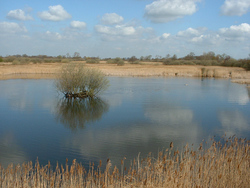