RAF Polebrook, east-south-east of Oundle, at Polebrook, Northamptonshire, was built on part of the Rothschild estate at Ashton Wold for RAF Bomber Command during late 1940 and early 1941. Ashton Wold was the estate created by Charles Rothschild (1877-1923).

From 1943 to Polebrook was designated USAAF Station 110. The actors James Stewart and Clark Gable were stationed at Polebrook. After the war, the airfield was kept usable until 1948 when it was closed.

RAF Polebrook was kept in caretaker status until 1959 when Thor thermonuclear missiles were stationed at Polebrook. The Thor missiles were operational until August 1963, when the rockets were removed and the unit disbanded.

With the end of military control, the remnants of RAF Polebrook were sold back to the Rothschild estate in 1967 and most evidence of its former military use, including most of the runways was dismantled and removed during the 1970s. 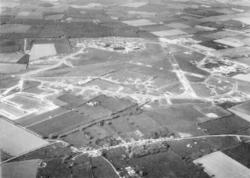