Charles Rothschild was a pioneer of nature conservation. In May 1912, he held a meeting to discuss his radical idea about preserving natural wildlife habitats. His aim was to organise“persons interested in the preservation of the natural fauna and flora of the United Kingdom.” This meeting led to the formation of the Society for the Promotion of Nature Reserves (SPNR).

Dancer's End was a very fine characteristic chalkland reserve which was part of the Tring Park Estate. It was kept in perfect condition until Charles Rothschild's death, after which it became neglected.

The Tring Park estate was inherited by Victor, 3rd Lord Rothschild (1910-1990) in 1937, on the death of Walter, 2nd Lord Rothschild (1868-1937). Charles' daughter, Miriam Rothschild (1908-2005) persuaded her brother Victor not to destroy Dancer's End as a reserve after the Second World War, but to hand it over to the Royal Society for Nature Conservation.

Miriam continued to look after the now reduced area and restored it as a chalkland reserve. She provided the funds and labour (the latter from her Ashton Wold Estate, and she provided sheep and goats to restore the turf). This restoration programme included fencing as well as the necessary animals, and a girl to look after the grazing goats. The reserve was very successful, and is said to have saved the Tring variety of the Burnet Moth, and produced a remarkably fine crop of Gentian germanica and Salvia pretensis, together with a fine show of species, including the High Brown Fritillary.

When Miriam Rothschild returned to live at Ashton Wold in the c.1969, she handed Dancer's End over the Royal Society for Nature Conservation who looked after if for several years. It was eventually handed over to the local branch. 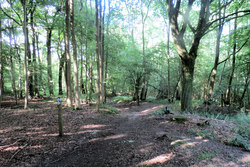