Lionel de Rothschild (1882-1942) bought the Exbury estate in 1919 with the proceeds from the sale of his uncle Alfred’s house at Halton which he had inherited.

The creation of Exbury's gardens

It was Lionel’s gardening passion which led him to choose the Exbury estate with its 2600 acres.  It was said of him, that he was "a banker by hobby and a gardener by profession", and it was here that Lionel realised his horticultural vision. The climate was gentle here and the soil was acid, ideal for the flowers which were to become his passion – rhododendrons. The estate included some 250 acres of overgrown woodland. Labour was recruited in huge force to create the gardens: a team of 150 men and 60 trained gardeners were employed to clear the land, lay paths and manage the planting, and 22 miles of irrigation pipes were laid. Two acres of greenhouses were put up and a million plants were introduced. Lionel worked tirelessly to bring shapes and colours together to please the eye.  The village was expanded to house the massive workforce, and a water tower containing electric generators was installed to supply the village houses with water, and bring electricity to the manor house and greenhouses. Here Lionel grew orchids and developed hundreds of new hybrid rhododendrons and azaleas for which the estate has become famous. The Gardens first opened to the public in the 1930s, the entrance fees raising funds for local charities.

The restoration of Exbury

Lionel de Rothschild died suddenly in 1942. At the end of the Second World War, it was left to Lionel’s son, Edmund (1916-2009), to roll back the years of  inevitable dereliction in the gardens. He did so with vigour and after his return from active service in 1946, he set about the restoration of Exbury Gardens. Over the next 50 years he replanted some three-quarters of the acreage, and produced several dozen new rhododendron hybrids. He also developed the highly successful Solent Range of Exbury deciduous azaleas, which are noted for their strength and colour. In 1955 he opened Exbury Gardens to the public.

Well into his eighties, Edmund de Rothschild would hurtle around Exbury's network of garden paths (designed to be wide enough for his father's Armstrong-Siddeley) in a small car with the number plate 'NMR 1'. He would stop the car to pass the time of day with the visitors, and liked to get out to hack off dead branches and blooms with a stout rhododendron-wood stave.

In the north east corner of the gardens runs the 12¼in (311mm) gauge Exbury Steam Railway that goes on a journey through a tunnel, around Dragonfly Pond, through the Summer Lane Garden, along the top of the rock gardens and into the American Garden. The railway was built in 2000–2001 as an additional attraction in the gardens at the request of Mr Leopold de Rothschild (1927-2012), whose great passion was steam trains; his good friend James Dunbar-Nasmith designed the main station. Two narrow gauge style 0-6-2 tender tank locos were built specially for the line by the Exmoor Steam Railway. The railway proved to be more popular than anyone had anticipated, with trains often needing to be double headed. To solve this problem, a much larger 2-6-2 tender loco, called Mariloo (named in honour of Marie-Louise, Mrs Lionel de Rothschild), was built at Exmoor, and entered service on the line in 2008. It is notable for having carried the Queen on a footplate trip round the railway. One of Mr Leopold's last wishes was that after his death, his coffin be carried on one last circuit of the private railway he created

Exbury holds the national collection of Nyssa (Tupelo) and Oxydendrum under the NCCPG National Plant Collection scheme run by the National Council for the Conservation of Plants and Gardens. Other features include the Hydrangea Walk, the Rock Garden, Iris Garden, the Sundial Garden, Centenary Garden and Camellia Walk (which takes visitors to a path alongside Beaulieu river and back via the pond).The Gardens continue to be looked after and developed with loving care by the current generation of Exbury Rothschilds, and Exbury remains today not only a significant name in horticultural history but a living and colourful tribute to a passion. 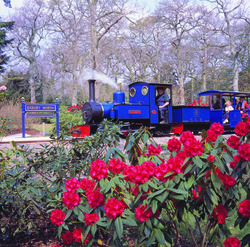