Salomon von Rothschild preferred life in Paris to Vienna, perhaps because of the greater freedom permitted to Jews there and his daughter’s presence nearby.  In 1832 he bought 17 rue Laffitte, a house which had been built in 1772 by Pierre-Louis Moreux and had once belonged to Louis Buonaparte and Queen Hortense.  Here Salomon bought neighbouring plots of land in order to extend the garden.  He made few alterations to the existing building.

The house was destroyed in 1900 to make way for an insurance company building. 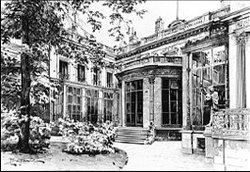