In 1873 Lionel de Rothschild (1808-1879) bought a farm at Ascott in Buckinghamshire for his son Leopold (1845-1917) who decided to turn it into a fashionable country house to entertain his guests.

Leopold had become a keen race-goer during his college days at Cambridge, with regular trips to Newmarket. The more desperately his mother urged him to study "something - drawing, painting, music, languages" - the more his interests turned elsewhere, principally to the turf. Leopold had inherited several houses and estates - 5 Hamilton Place in London and Gunnersbury to the west of the capital, and Ascott in Buckinghamshire. He acquired Palace House in Newmarket, which became his spiritual home. Here, the Prince of Wales often stayed with him along with many prominent figures of the day.

Leopold took over the running of his father's stud at Gunnersbury in 1879, the year of his father's death, before moving it to his Ascott estate. Built in 1880, the stud farm and its adjoining former managers' homes, and 'Rothschild style' cottages, are known as 'Southcourt Stud', located in Southcote (or Southcott) a hamlet of little more than one road of cottages, located to the south of the small town of Linslade, which itself is joined to the larger town of Leighton Buzzard. From here, Leopold bred many winners. His trainers included Tom Cannon, his son Tom Cannon Jnr, Joseph Hayhoe and John Watson. Leopold's famous horse, Sir Frusquin, retired to Southcourt.

Leopold’s hospitality and generosity were legendary, and Ascott provided the perfect rural retreat at which to entertain with comfort and refinement without ostentation or extravagance. The attractions of Ascott for hunting enthusiasts were added to by the other amusements Leopold offered them: golf, lawn tennis, croquet and bridge were among the favourites. On Leopold's death in 1917, Ascott passed to his son Anthony Gustav de Rothschild (1887-1961).

In 1949 ownership of Ascott house was transferred to the National Trust; Southcourt Stud is still owned by the Rothschild family. 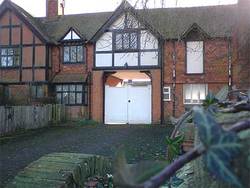