Hamble Cliff is situated along Southampton Water, to the east of the Royal Victoria Country Park, with access to the water.

Hamble Cliff House was built in the early 1800s by Sir Arthur Pagent, a diplomat who retired after a scandal. He chose the site badly (according to his family) for sailing and his interest in agriculture, which may explain the very large walled gardens. The property later passed to the Yorke family (who owned the neighbouring Sydney Lodge); the Hon. Eliot Constantine Yorke (1853-1878) married Annie de Rothschild (1844-1926), the second daughter of Sir Anthony and Lady Louise de Rothchild in in 1873. Hamble Cliff’s last resident was Annie who died there in 1926.

Both Sydney Lodge and Hamble Cliff were purchased by British Marine, (later known as Folland Aircraft Limited) between 1934 and 1936, for the land and access to Southampton Water. Hamble Cliff (Cliff House) was by this time derelict and Sydney Lodge had been let for some years. The large old walled gardens became the site of a factory with a slipway.

In 1992, the Grade II listed Hamble Cliff house was transformed into apartments, the coach house and stables having been converted into residential property in the 1970s. 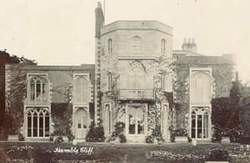