Curzon Street W.1 is located within the Mayfair district of London. The street is thought to be named after George Howe, 3rd Viscount Howe from the House of Curzon. Before this time, it was called Mayfair Row.

Curzon Street was an extremely fashionable and desirable London address.  The house at 17 Curzon Street was the London home of the Hon. Eliot Constantine Yorke (1843-1878), who married Annie Henriette de Rothschild (1844-1926) in 1873. Other notable residents of the street included members of the peerage, the art collector Edward Solly and Benjamin Disraeli. Alfred de Rothschild (1842-1918), Annie's cousin, had a grand house at 1, Seamore Place, which at that time was just off Cutrzon Street.

Eliot Constantine Yorke was a British politician and courtier. Annie de Rothschild enjoyed a very happy, though tragically brief, marriage to Eliot Yorke who died five years after their wedding on 11 February 1873. There had been initial family objections to the marriage since Eliot was not Jewish. The couple also lived at Hamble Cliff, Hamble, Hampshire, and Annie spent much of her time here after Eliot's death. She died there on 21 November 1926.

In the twentieth century, the sales office of Radio London (also known as 'Big L' and 'Wonderful Radio London') was opened at 17 Curzon Street in 1964. The station, which operated from 23 December 1964 to 14 August 1967 from a ship anchored in the North Sea, like other offshore radio operators, was dubbed a pirate radio station; the introduction of the Marine Offences Act, which became law after midnight on 14 August 1967, forced the closure of all of these offices. 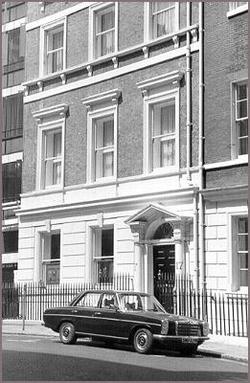