No.6 Buckingham Palace Gate is a classic white stucco-fronted 19th-century town house situated directly opposite Buckingham Palace. It stands in the former grounds of the Jacobean mansion, Tart Hall. In 1633 the Hall was purchased by Thomas Howard, the Earl of Arundel, for his wife, Lady Alethea, as a pleasant retreat from Arundel House, near the Strand. The newly laid road ‘Buckingham Gate’ first appeared on the ordnance survey map of 1869. 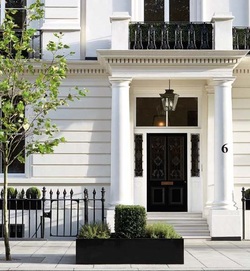