Nathan Mayer Rothschild’s third son, Nathaniel, made his home in France after marrying his French cousin Charlotte.  In 1856 he bought 33 rue du Faubourg-Saint-Honoré in Paris for FF1,675,000 from the duchesse Decrès.

The original house of 1714 had been built by Grandhomme, and Nat set about altering it almost immediately with designs by the architects Emile Petit and Robillard. Here Nat housed his Old Masters, eighteenth century furniture, manuscripts and books.  Charlotte outlived Nat by 29 years, and her tastes were clearly reflected in the house with the replacement of sculptured ornamentation on the façade looking on to the garden, with musical motifs which included a harp, mandolin and flute.  She also had 18th century wood panelling put up inside, while Eugène Lami was called in for the decoration of the salons; sadly, no trace of this work now remains.

The house later descended to Henri, and was sold to the Cercle de l’union interalliée in 1920. 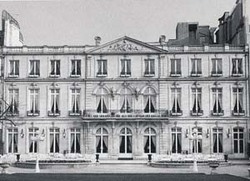