With her keen appreciation of art, Charlotte de Rothschild (1825-1899) was no doubt attracted to the ruins of the Abbaye des Vaux-de-Cernay for its picturesque qualities when she purchased the Cistercian abbey in 1874 and 1875. Over the next few years, with the help of the architect Félix Langlais, she restored those parts of the building which could be lived in in the original style, making the oratory into a music room and the abbot's quarters into a studio, a library and drawing-room. Here, in the rolling countryside of the Ile de France south of Paris, Charlotte made her summer residence, where she could house her collections of medieval and Renaissance objects, and entertain personalities such as Queen Amélie, Princess Mathilde, Georges Bizet, Saint Saëns and Alfred Dumas fils.

When she died in 1899, Charlotte left the abbey to her son Arthur (1851-1903) who died four years later, and it then became the property of Henri (1872-1941) and Mathilde (1874-1926). Henri used it as his laboratory, opening the park and ruins on certain days of the year to the public in the 1920s. At the abbey he carried out his experiments and wrote up the notes which resulted in his many publications on child nutrition. Henri ceased to live there after his wife's death, and during the War the abbey was seized by the Nazis. The house became a centre for agricultural studies, and is now a hotel. 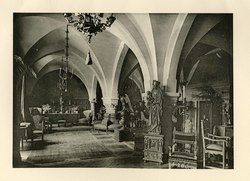