In 1838, James de Rothschild bought a town house at 2 rue Saint-Florentin overlooking the Tuileries gardens and the Place de la Concorde.  The house had belonged to the duchesse de Dino, the only legatee of her uncle Talleyrand.  Both Talleyrand himself, and Tsar Alexander had stayed there.

The house was significantly altered with the addition of three neighbouring houses in the rue Mondovi.  However, James never lived there, and it was his son and daughter-in-law, Alphonse and his wife Leonora, who made it their Paris residence. Alphonse was an avid and sensitive collector, and he filled the house in the rue Saint-Florentin with his collections, displaying them in a suite of five rooms.  Here he displayed antique marble statues, 18th century bronzes, Renaissance enamels, majolica, clocks, jewels and objects in rock crystal.Ferdinand, himself a connoisseur of the arts, was full of praise for the house and its collections when he visited in 1874: "I never saw a prettier table than Alphonse’s.  It actually groaned under the weight of green Sèvres  ...The rooms were lit a giorno and Alphonse seemed much pleased, and justly so, with his own arrangements".

Alphonse bequeathed the house to his son Edouard.  He and his wife loved the house and lived there until the Second World War.  It has belonged to the American Embassy since 1950. 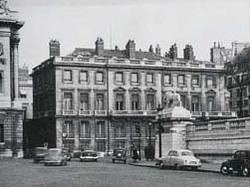