The house at 23 avenue de Marigny was originally three houses which Gustave de Rothschild transformed and aligned to create a very successful new house.  The purchases, made between 1869 and 1879, were probably made at the instigation of Gustave’s wife, Cécile, and she was instrumental in the decoration of the house.  Inside and out, the house was embellished with elements from 18th century Parisian houses destined to be demolished.  Cécile’s art teacher painted allegorical scenes over the doors in the Louis XV drawing-room, incorporating portraits of members of the family, while Cécile herself added sculptures to the mantelpieces.

Robert, who inherited the house in 1911, made his own alterations, but his most significant addition was to the garden.  He commissioned Jean-Charles Moreux, a noted architect, decorator and landscape artist, to plan the designs.  They were highly innovative, and included a niche, flanked by Doric columns with a De Chirico fresco in the centre showing two horses stepping over fallen Doric columns, as well as the use of mirrors, while at one end of the grounds was a swimming-pool and gymnasium.

The house was closed during the shooting season while the family were at Laversine, but Nelly, Robert’s wife, was always keen to return to Paris.  The couple were at the heart of the Parisian high and artistic society, and their annual garden party was an important event.

In 1975 the house was bought by the nation and is now used as a residence for visiting heads of state. 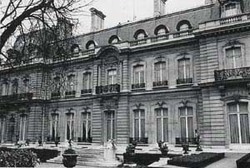