In 1876 Edmond de Rothschild bought the ‘hôtel de Pontalba’, built in 1839 and designed by Louis Visconti.  From 1878 Edmond had significant alterations carried out on the house for which he commissioned Félix Langlais, an architect frequently employed by the family who worked on Armainvilliers and several Paris houses.  Although Edmond favoured the quiet life, his plans were ambitious: he wished to be able to assemble between 1,500 and 1,800 people in the reception rooms and ballrooms.  Like his brothers and cousins, Edmond purchased elements from houses which had been pulled down in the faubourg Saint-Germain.  The Goncourts, who visited the house in 1889, claimed that the house was the most princely they had ever seen in Paris.

In 1934 Edmond died, and his second son, Maurice, inherited the house.  Maurice added new buildings, including a new wing designed by Louis-Clovis Heckly, and he also converted the east ballroom into a gallery for his paintings.

After the Second World War, the house was bought by the United States government and is now the American Embassy. 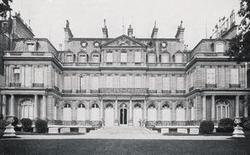