No. 47 rue de Monceau, Paris, was built in 1865 and designed by the architect Willem Bouwens van der Boijen for the banker Eugène Pereire.  In 1868 Adolphe de Rothschild bought the house from Princess Mingrélie and the Marquess de Fernandin.  He made various additions to it, commissioning the architect frequently used by the family, Félix Langlais, to work for him.  These additions included a one-storey wing with glazed roof to act as a ballroom, and a gallery to be used as a conservatory and smoking-room.  A further interesting addition made in 1894 at Julie’s request was a photographic studio.  Julie had a keen appreciation of French art and furnishings of the 18th century, and she filled the house with artistic treasures.  Adolphe, for his part, favoured the Middle Ages and Renaissance, and at the rue de Monceau he housed his collections in galleries illuminated by skylights.

Maurice, Edmond’s second son, inherited the house in 1907 on the death of Julie, and made significant alterations. 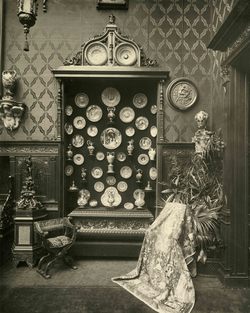