In 1878, James Edouard de Rothschild bought two hectares of land at Berck-sur-Mer within a couple of hundred yards of the tubercular hospital he had built in 1871.  Here he built a Swiss style chalet among the dunes facing the sea with the intention of spending the summer months there. James called it the ‘Chalet des Oyats’, oyats being a sort of gorse that grows in sand dunes.

Compared with many seaside villas, the Chalet des Oyats was relatively simple, although like others it was polychrome, and shared with them a steep-pitched roof, gables and polychrome.  It was raised above ground level on wooden legs and was surrounded by a verandah.

After James’ death, his widow Laura Thérèse used it as her seaside villa.  Here she started a clinic for consumptive children. The chalet was destroyed during the Second World War. 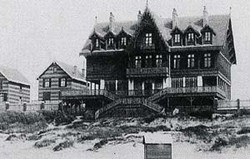