The château des Fontaines was begun by James Edouard in 1879 and finished in 1882 by his widow, Laura Thérèse. It was designed by Félix Langlais, a favourite architect with the family, according to James' plans. It was James, too, who gave instructions for the decoration and furnishing of the house. The salient features of this picturesque château were its steep-pitched roofs, the polychrome stone and brick and its high turrets. The variety of influences (medieval, early 17th century, Louis XIV) made it markedly different from previous Rothschild houses. Laura Thérèse made the château her summer residence until her death in 1931, continuing to use it even after she had made it over to Henri on his marriage in 1895. Henri himself rarely visited, but his son, Philippe, spent many summers at the château with his grandmother. In the neighbouring town of Gouvieux, Laura Thérèse founded a dispensary, a school and a library.

The château was occupied by the Nazis during the Second World War, and in 1946 was taken over by the Jesuits who set up a library and research study centre there. In 1970 it became the Centre culturel des Fontaines. In 1998, the Capgemini group acquired the château, and in January 2003 they opened an international campus to provide staff and clients with a unique place for seminars and corporate events. 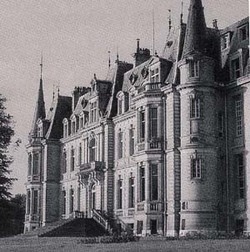