Between 1904 and 1913 Edouard de Rothschild (1868-1949) bought  plots of land to create an estate of some 20 hectares in the heart of horse-racing country in Gouvieux-Chantilly.  Edouard commissioned  the architect Charles Girault, whose fame had been assured by the building of the Petit Palais in Paris.  Building began in 1906.

Edouard’s passion for the Middle Ages was illustrated in this Gothic country house, for which he studied numerous documents and used the château de Montal, a Renaissance house in the Lot region, as his model.  The château was a veritable medieval manor, and included features such as sculptured wood and stone, and devices that opened secret doors.  Next door were the stables where horses were trained.  Edouard and his young family spent the Easter holidays and the months of July and September at the château. 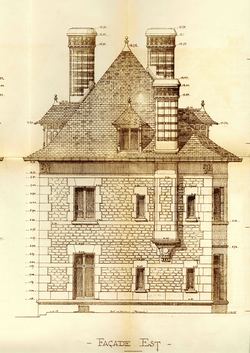