The villa 'La Clairière' in Gap was built for Maurice de Rothschild in the inter-war years when he was deputy in the Hautes-Alpes. It was designed by Louis-Clovis Heckly, an architect who had already worked on Maurice’s houses in Paris as well as several public buildings in Gap.  Situated half-way up the Charance mountain, La Clairière was built along classical lines, in imitation of the architecture of the 18th century.  Originally a single storey topped by a balustrade, it gained a second storey at a later stage. 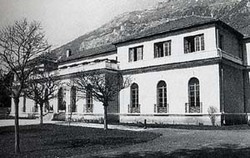