Henri de Rothschild's château de la Muette was built on the site where Henri IV had once built a château for his first wife, Marguerite de Valois.  A new château was completed for Henri  in 1922, and he made it his Paris residence, hosting splendid receptions in the drawing-rooms among his works of art.  After the death of his mother, Laura Thérèse, in 1931, he rehung the panelling from her château des Fontaines.  Henri furnished the house with Beauvais tapestries, marquetry tables inlaid with bronze from the 18th century, cabinets by Riesener, Weisweiler and Topino, as well as sofas and chairs upholstered with Gobelins tapestries which his father, James Edouard, had bought from the Duke of Parma.  The design of the gardens was one of the most important the Rothschilds ever made.  In 1914, the Société amateur des jardins suggested to Henri that he hold a contest for the arrangement and decoration of his garden.  The garden that was chosen by the winner, R. Saint-Martin, was much reduced by the encroachment of new roads.

Not long after Henri's death, his heirs sold the house to the Organisation Européenne de Coopération Economique. 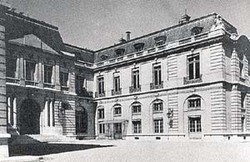