The Villa Grüneburg was built on four acres of land on Amschel von Rothschild's estate which he had given to his niece and nephew, Charlotte and Anselm. The style appears to have been Charlotte's choice, for in a letter in 1844 she wrote,

"I am hesitating between the Elizabethan and cottage style, as it is to be perfectly English".

The architects Bellanger and Jacob von Essen were commissioned to draw up plans and work started in 1850. With its rich decorative features, the villa showed allusions to both the Baroque architecture of Southern Italy and to the French chateaux of the Loire.

When Anselm, died the house passed to his daughter Hannah Mathilde and her husband Willy Carl, who used it as their summer residence. In 1944 the property was destroyed by Allied bombing.

The land is now a public park. 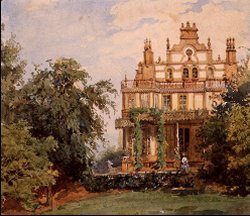