Between 1907 and 1912 Henri de Rothschild had a villa built for him at Deauville, which, with its horse-racing and cosmopolitan lifestyle, was becoming a popular and stylish seaside resort in the early years of the century.  With his preference for regional architecture, Henri commissioned G. Pichereau to build this vast house in the neo-Norman tradition.  The result was a typical seaside villa, irregular and with a somewhat fairy-tale appearance.  Henri called the house the Ferme du Coteau.  At his death his son Philippe inherited it.

After the First World War, the villa was sold to M. Strassburger, the president of Singer sewing machines.  Today it is called Strassburger and has belonged to the town of Deauville since it was given to them in 1980. 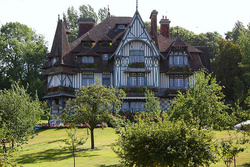