With the development of the railway, the French Riviera had become popular with European high society, and Baroness Charlotte (Béatrice) Ephrussi (née de Rothschild) (1864-1934) built or renovated no less than four houses along the coast.

Béatrice married Baron Maurice Ephrussi, a Russian-born member of the aristocratic Ephrussi family in 1883. The couple maintained an  impressive estate, the Château de Reux along with L'Hôtel Ephrussi-Rothschild in the avenue Foch in Paris and villas in Monte Carlo, attracted it is said to the area by the casino of which they were both rumoured to be fond. The couple used Béatrice's wealth to travel the world and to acquire a collection of paintings including Old Masters, plus sculptures, objets d'art, rare porcelain and antique furniture.

In 1902, her husband's cousin, Théodore Reinach began building a Grecian-style villa at Beaulieu-sur-Mer on what became known as the French Riviera. Visiting his Villa Kerylos, Béatrice fell in love with the area and conceived the plan to construct the Villa Île de France (Villa Ephrussi de Rothschild). Béatrice acquired a 17-acre (69,000 m2) parcel of land on Cap Ferrat where she built a luxurious Venetian style villa in the Goût Rothschild designed by Aaron Messiah, a local architect.

Between 1905 and 1912 Béatrice worked closely with the architect to produce a partly Italianate, partly Spanish villa with a pink and white façade and red pantiles.  Each room was arranged specifically to show off her collection of objets d’art  to their best advantage. The drawing-room was Louis XV style and the dining-room was Gothic, while all the other rooms were Regency.  The gardens surrounding the house were particularly beautiful, and were laid in varying styles to include a Spanish, Florentine, stone, Japanese, English and French garden.

She filled it with many of her collections and created her own private zoo with exotic birds and animals including flamingos budgerigars, monkeys, mongooses, antelopes, and gazelles. The completed villa formed the backdrop for her art collections, some inherited from her father. However, the overall effect was more of a museum than a domestic house, and Béatrice rarely lived there.

Béatrice Ephrussi de Rothschild died in 1934 at the age of 69 at the Hôtel d'Angleterre in Davos, Switzerland. She was buried in Paris in the Père Lachaise cemetery. In her will, the Baroness bequeathed the Villa Île de France and its art collections to the Académie des Beaux Arts division of the Institut de France for use as a museum; today The Musée Ephrussi de Rothschild preserves the name of Béatrice's husband together with her own. 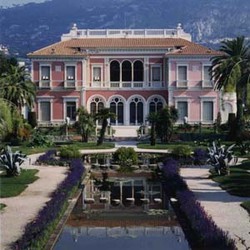