Nathan Mayer Rothschild appears to have settled in Manchester from about 1799 where he lived in at least two houses.

He is known to have been living in Downing Street, Ardwick Green to the east of the city in an elegant neighbourhood mainly occupied by merchants near the main route to London.  At this time his warehouse was probably in Brown Street.

By about 1806 Nathan was living in Mosley Street with his warehouse directly behind the house in Back Mosley Street, a fashion which Nathan is credited with initiating.  Mosley Street was centrally placed and clearly becoming a fashionable location.  During the time he was there the Portico Library was built in the street, and by 1822 it was described as "without exception the most elegant street in Manchester".

In 1809, Nathan moved with his family to London, taking up residence in New Court, St Swithin's Lane. 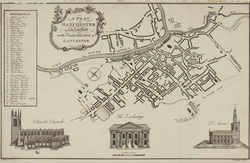