Gunnersbury consists of two mansions, the larger of which, built by Alexander Copland, was purchased by Nathan Mayer in 1835. Nathan died the following year, and his widow, Hannah, used it as her second home and continued with the neo-georgian alterations under the architect Sydney Smirke. Her eldest son, Lionel, took over the estate at her death, enlarging the park in 1861 and adding a pleasure lake and boat house, and improving the house to give it all modern conveniences, including gas lighting and water closets. The extensive kitchens reveal the importance of entertaining here, but the comparatively few bedrooms suggest that the proximity of the house to London enabled guests to return home at night. One of the most splendid functions to be held at Gunnersbury was the marriage of his eldest daughter, Leonora, to her cousin Alphonse, in 1857.

Although not as grand as many of the Rothschild houses, Gunnersbury became much loved by the family, and when Evelina visited Ferrières she wrote back affectionately that its was "not as green as our little Gunnersbury". When Lionel’s wife, Charlotte, died, the house passed to their youngest son, Leopold.

Leopold made significant alterations to the gardens, and when he purchased the Small Mansion in 1889, he laid out in its grounds a Japanese garden, a heath garden, ivy garden and an Italian garden. Under his management, Gunnersbury continued to be the scene of important social events, while the estate saw the building of new houses and local hospitals and schools benefited from Leopold’s noted philanthropy.

Gunnersbury after the Rothschilds

In March 1925, the land, house and gardens were purchased for public use for £125,000 by the Boroughs of Acton and Ealing. Middlesex County Council contributed towards the cost. On 21 May 1926, the Rt Hon. Neville Chamberlain M.P., Minister for Health opened the new public Gunnersbury Park. Brentford and Chiswick joined in the ownership and management in 1927, and the mansion became a local history museum. 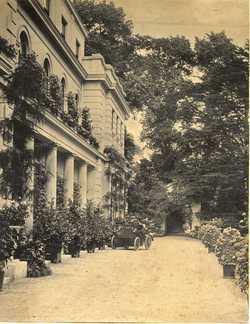