Lionel acquires a lease on 148 Piccadilly

The opportunity to move to 148 Piccadilly had come about following the death of Vice-Admiral John Tollemache. A notice in the Gentleman's Magazine had recorded the Admiral's death on 16 July 1837 "at his residence in Piccadilly Terrace", [No. 148 Piccadilly]. The Terrace was the row of houses (no longer standing) on the north side of Piccadilly, running from the east side of Apsley House (No. 149) to Hamilton Place, with Hyde Park behind.

It woud appear that initially Lionel leased 148 Piccadilly, exchanging 10 Hill Street for the more spacious interiors of a Piccadilly residence without any definite prospect of long-term tenure. In 1842, he nonetheless obtained estimates from Cubitts for improvements, including alterations to the top of the house that involved adding a storey and installing a new staircase, as well as to the existing "Attic floor, Chamber floor, Drawing Room floor, Ground floor, and Basement". The alterations to the drawing-room floor were to include a new conservatory' (£350), those to the basement new offices under the garden (£1,250). The estimate came in total to £3,220. Possibly, as with Hill Street, Lionel took No. 148 furnished.

In 1843, Lionel seems very nearly to have left No. 148 for another house in Piccadilly. In June 1843, his sister Charlotte (‘Chilly’) (1807-1859) wrote to congratulate him on his “new house”, while his brother Nat (1812-1870) wished him and Charlotte  “every happiness for a long series of years in your new residence”. Away from home that August, Lionel himself wrote to Charlotte:  “Anthony writes that Dawes [the lawyer] was not quite satisfied with the papers about the house in Piccadilly ... I am glad to see that you have not taken possession of the house; follow Dawes's advice, he is perfectly honest and merits all confidence.”

Lionel purchases 148 Piccadilly, one of the best addresses in London

No. 148 Piccadilly continued to be rated to the Tollemache until 1844, when Lionel purchased the property; in December 1844, John Tollemache wrote to fix a convenient time "to remove my pictures from 148 Piccadilly".

No. 148 was in one of the very best locations in London, in keeping with which the domestic staff was led by a capable butler-cum-valet named Toogood. The housekeeper's name was Mary Cobham. When Lionel and Charlotte moved into their new house, a fair proportion of the local residents already had, and if not would before long form, connections with the Rothschild family. With the Duke of Wellington at Apsley House on the western side, their next neighbour to the east, at No. 147, was Lady Cockerell, widow of Sir Charles Cockerell, Bt, the East India Company writer who had made a fortune in Bengal before returning to England to set up as a banker and to enter Parliament. Lady Cockerell was a daughter of the first Lord Northwick, and it was her brother, who inherited the peerage, that assembled the vast Northwick collection of paintings and works of art. 148 Piccadilly was a convenient location for keeping abreast of social events. Lionel and Charlotte played host there to friends and dignitaries such as Disraeli, the Duke of Wellington and J.T. Delane of The Times for dinners and informal visits.  It was here that Lionel’s daughter, Evelina (1839-1866) celebrated her marriage to her cousin Ferdinand (1939-1898) in the presence of London’s high society.

Expansion of the property

Lionel de Rothschild acquired the lease of  the neighbouring property, 147 Piccadilly in the late 1850s.  Between 1859 and 1860 the two houses were merged according to designs by Thomas Nelson and Charles Innes.  In many ways the resulting house was typical of London houses of the period, with double Doric columns at the entrance supporting a balcony with balustrade above, and a vast hallway inside forming the centre point of the house.

The house passed to Nathaniel (‘Natty’), 1st Lord Rothschild and after his death to his wife Emma, Lady Rothschild (1844-1937) and then to Victor, 3rd Lord Rothschild (1910-1990).  In 1937 the property was auctioned and was later demolished to ease traffic congestion. 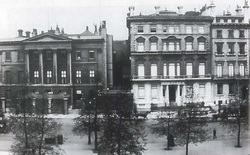