No. 15 Untermainkai had originally been designed in 1821 by Frankfurt's master builder, Johann C F Hess as a luxurious residence for the banker Joseph Isaak Speyer. The design was unusual among the classical buildings of Frankfurt, with many Italianate features. When Carl von Rothschild bought the property in 1846 he commissioned the architect Friedrich Rumpf to make alterations.

The house took on a slightly different character, with Moorish and Middle Eastern features, notably the arabesque balustrades, which perhaps took their inspiration from the new Summer Palace in Stuttgart of William, King of Württemberg, built in 1842.

In 1894 Hannah Louisa, Carl's granddaughter, established the Baron Carl von Rothschild public library in the house in memory of her father.

In the 1960s the rooms were rebuilt and refurnished to be used as an annexe to Frankfurt's Historical Museum. It now houses the Frankfurt Jewish Museum. 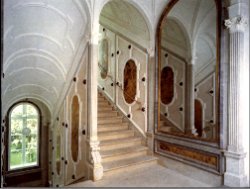