According to family legend, Charles Rothschild fell in love with the Northamptonshire countryside where he was searching for butterflies.  He was particularly struck by an empty Elizabethan house, which by good fortune turned out to belong to his father Natty and which Charles persuaded his father to make it over to him.  However the house was in a hollow and so deemed bad for the health.  Charles accordingly commissioned the architect William Huckvale, who had worked on Rothschild properties at Tring, to build him a new house and at the same time rebuild the village nearby.  Huckvale designed a rambling, Tudor-style manor house with a succession of gables and very large and pretty Elizabethan windows as a reminder of the original property.  In the village, local stone and thatched roofs were used to reconstruct the cottages which were provided with running water, bathrooms and large gardens.

Miriam Rothschild inherited the house after her parents’ deaths. The gardens she created and nurtured at Ashton Wold in Northamptonshire were described as ‘an outstanding example of wildflower and grassland gardening’. Her expertise in nature conservancy led to her advising HRH Prince Charles, the Prince of Wales when he was creating an experimental wildflower meadow at his Highgrove Estate. In her book, The Rothschild Gardens, Miriam Rothschild described her passion for the gardens. 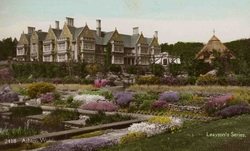