In 1836, Nathan Mayer Rothschild’s widow, Hannah, bought a few acres of land at Mentmore in Buckinghamshire for her sons so that they could take healthy exercise away from the city.  In 1850, Nathan's son Mayer Amschel (1818-1874) bought the Manor of Mentmore for £12,400 and commissioned Joseph Paxton and his son-in-law George Stokes to build him a house.  The resulting plans, while Jacobean in style, incorporated the most modern features, including a huge central grand hall with glazed roof, plate-glass windows and central heating.

Mentmore Towers stands four-square on a slight rise with towers at each corner, and is the largest of the English Rothschild houses.  Visiting it in 1872, Lady Eastlake said that it was "like a fairyland when I entered the great palace, and got at once into the grand hall -40ft by 50, and about 100ft high -hung with tapestries, floored with parquet and Persian carpets".

Mayer died in 1874 leaving Mentmore to his only child, Hannah (1851-1890). Hannah later married Lord Rosebery, and the house remained in the Rosebery family until it was put on the market in 1977. The auction of the contents in the same year was one of the major sales of the century.

In 1978, The Maharishi Foundation in the UK purchased Mentmore Towers for ₤240,000 for use as a headquarters and college. It was the headquarters of the Natural Law Party and campus of Maharishi University of Natural Law. By 1997, the movement was seeking a larger facility and placed Mentmore on the market for ₤10 million. It sold two years later for ₤3 million. 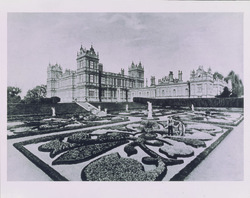