The first major event at Halton, after its purchase by Lionel de Rothschild in 1853, was one of the earliest Industrial Exhibitions, organised by Sir Anthony and opened by Disraeli.

The existing house was built after Alfred inherited it in 1879.  On 15 January 1884 the house, designed by William Cubitt & Co., was opened in the presence of the Prince of Wales. Halton was based loosely on a French Renaissance château, but boasted various modern features including electric lighting and a hot-air heating system.  With its ornate skyline consisting of steep French pavilion roofs, pinnacles, chimney stacks, and domed Winter Garden, it was not to everyone’s taste at the time.  Judged by Lady Frances Balfour as "terribly vulgar", to Constance, Lady Battersea (née de Rothschild) (1843-1931) it was nevetheless Alfred’s "beauteous home on earth", while for Country Life it combined "classical grace and modern elegance".

Halton and the RAF

In 1914 Halton was taken over for use as an army base, and later in the war was used by the newly formed Royal Flying Corps.

Upon Alfred’s death, Halton passed to his nephew, Lionel.  It was subsequently sold to the War Office, and was later occupied by the Royal Air Force; it remains in their possession today as RAF Halton. For further information about life at Halton, see Beechwoods and Bayonets: the Book of Halton Andrew Adam (Buckingham: Barracuda Books, 1983) and The Story of Halton House: Country Home of Alfred de Rothschild, Beryl E. Escott (Halton House, 2008, (fourth edition)). 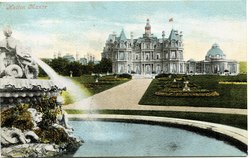