The 4th Earl of Buckinghamshire, Robert Hobart, a politician and Colonial Administrator, was the first to live at No. 5 Hamilton Place from 1812 to 1816. He was followed by three generations of an even grander aristocratic family: the Conynghams. The 1st Marquess Conyngham entirely owed his whole rank and station in life to his wife’s close personal friendship with the Prince Regent, later George IV, who undoubtedly visited No. 5 Hamilton Place. When the Regent succeeded to the throne in 1820, the Conynghams’ importance greatly increased. The King heaped presents on Elizabeth and even permitted her to wear a number of the Crown Jewels in public. The house remained in the family until 1878, when the 3rd Marquess Conyngham sold No. 5, ending the family’s 60-year association with Hamilton Place.

Lionel de Rothschild (1808-1879) acquired the lease of 5 Hamilton Place situated behind his house at 148 Piccadilly bordering Hyde Park. He bequeathed it to his youngest son, Leopold (1845-1917), and in 1881, Leopold began developing the property as a London residence for himself and his new bride, Marie Perugia of Trieste, whom he had married at a lavish wedding at the Central Synagogue, Great Portland Street earlier that year.

With Leopold’s arrival, Hamilton Place became known as ‘Rothschild Row’ and was soon the centre of the Mayfair social scene. Initially planning to rebuild the house altogether, Leopold finally decided to keep the existing structure but make alterations, drastically remodelling the mansion to suit his extravagant tastes. The overall style was heavily influenced by fin de siècle Louis XV with Renaissance flourishes. The house became a vast mansion of white stone, a pastiche of various styles atypical of late Victorian architecture. William Rogers, of the firm William Cubitt & Co., who designed the alterations in 1881, added two storeys, a conservatory the whole height of the north front, and open arcades along both sides of the ground floor. The basement storey was extended underneath the terraces and part of the garden, and at the top of the property, the roofs and attics were removed and the walls raised several feet higher to obtain two storeys of bedrooms. Additional space was added on two sides of the house, as high as the level of the second floor. This created an open corridor or arcade on both sides of the ground floor; but on the first floor, an open loggia was created in the central portion of the west front, and a glazed gallery the whole length of the north front.

Inside, Leopold employed 40 Italian craftsmen from the Florentine workshop of Rinaldo Barbetti, who worked for two years to complete the superb panelling in the library, hand-carved in maple and mahogany. There was a serpentine staircase and a kitchen where a whole ox could be roasted on a spit. The house also boasted a hydraulic lift, supplied by huge water tanks stored under the new roof. The house had private gardens to the north and west, and from the drawing room windows there were magnificent views of Hyde Park  These views were even more splendid from the upper floors. The space over the loggia on the west front was an open terrace, frequently used for entertaining in the summer, and the gardens boasted a tennis court.

After the death in 1917 of Leopold, his widow, Marie, spent less time at 5, Hamilton Place, and in 1930, the property was sold. Captain Leonard Frank Plugge, a businessman and Conservative politician,  purchased the house in 1934. Plugge lived at No. 5 Hamilton Place until 1950, when he sold the house to John Mills, a Polish emigré, who relocated his club, Les Ambassadeurs to the property. Mills ran Les Ambassadeurs until 1981, when it was purchased by casino group London Clubs International (LCI) part of Caesars Entertainment Corporation and in 2006 by Bluestream Holdings Limited. Landing International Development Limited purchased the club in 2016 and sold it in 2017 to Mr Cho Hung Suen. 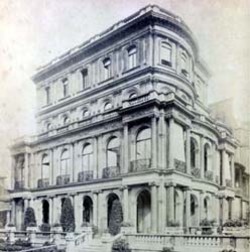