Here, at his London residence, Alfred held his famous 'adoration dinners', intimate banquets attended only by one woman in whose honour the dinner was held and who was presented with a gift at the end of the evening.  It was here, too, that a reception was held for the wedding of Alfred’s brother Leopold and his wife Marie Perugia in 1881.

Alfred used the house to hang many of his pictures and display his works of art.  The splendid decor confirmed Lady Dorothy Neville in her view that Alfred was "the finest amateur judge in England of 18th century French art".  Disraeli declared that 1 Seamore Place was "the most charming house in London, the magnificence of its decorations and furniture equalled by their good taste".

Alfred bequeathed both the house and its contents to Almina, Countess of Carnavon, whom he acknowledged as his illegitimate daughter.  The proceeds of the sales she made helped finance the excavations carried out by Lord Carnavon and Howard Carter in Egypt at which Tutankhamen's tomb was discovered.

In 1929, Almina put 1, Seamore Place on the market with Knight, Frank & Rutley. It was left unsold.  In 1936, Westminster City Council purchased the property from Almina for £43,000; the house was subsequently demolished to construct a new road to connect Park Lane and Curzon Street, and to give Curzon Street direct access to Hyde Park. 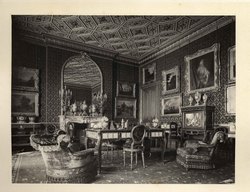