Unlike his brothers, Nathan Mayer Rothschild was hostile to the idea of acquiring an estate, wishing to avoid the appearance of living in an ostentatious manner. Nevertheless, in 1816 he acquired a house and eight acres of land at Stamford Hill to the north of London.

On a date unknown, Nathan secured the remainder of a 61-year leasehold term in a piece of land "on the side of the road from Newington to Stamford Hill In the parish of St John Hackney...comprising 8 acres and 26 perches, together with a messuage or tenement and premises thereon erected and built", at a rent of £55 p.a. The original lease had been made by the owners Richard Benyon and Peter Beauvoir to Henry Sanford In 1792. On 20 September 1821 William George Daniel Tyssen had leased to Nathan "two pieces or parcels of land situate lying and being at Stamford Hill in the parish of St John in Hackney, containing 11 acres, 1 rood and 14 perches." The lease was for 31 years at £45 p.a. Nathan was already in occupation.

At that time the property at Stamford Hill it was still sufficiently outside London for Nathan’s sister to describe it as a "beautiful country estate" and for his wife, Hannah to write in a letter, "We are still at Stamford Hill. We find this situation more agreeable than in the streets of London; we do not have any of the benefit from our National friend, the fog..."

The family enjoyed life at Stamford Hill, and Nathan was able to become involved in the local community, acting as vice-president of the Stoke Newington dispensary and improving his estate.

Nathan sold the house and eight acres of land in 1835 by auction to Joel Emmanuel, the Bond Street jeweller and philanthropist on 29 September 1835 for £1950. 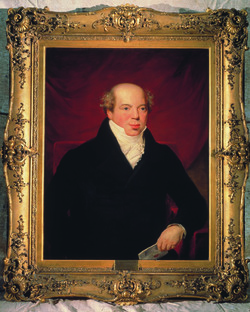