In 1875 Alice de Rothschild bought Eythrope in Buckinghamshire, a property bordering her brother Ferdinand’s estate at Waddesdon. Here she had a pavilion built beside the river Thame. Alice chose one of the Rothschild family's favourite architects George Devey who had worked at nearby Ascott House, Aston Clinton House and Mentmore Towers. Eythrope was something of a deviation from his usual approach. It is constructed in red brick with stone dressings. With its twisting chimneys, turrets and gables, it is a mixture of Devey's usual Jacobean style and the French Renaissance architecture of Waddesdon Manor. This is especially noticeable on the concave roof to the round tower, and the gable on the garden facade which are particularly reminiscent of Waddesdon. Because of its small size the house was christened 'The Pavilion' or the 'Water Pavilion'.

While building was in progress, however, Alice fell ill with rheumatic fever, and was told by her doctor never to sleep near water.  The plans were therefore altered, and the pavilion was built without a bedroom.  That way Alice would never be tempted to spend the night there.  Instead she housed her works of art in the pavilion; as in other Rothschild homes, French paneling and furniture dressed the rooms. Alice also collected Renaissance sculpture, paintings and maiolica ware. She entertained her friends there, but always returned to her brother’s house at Waddesdon to sleep. Typically, visitors would take tea at Eythrope, either in the pavilion itself, or, if the weather were good, further down the river at the Old English Tea House (now lost) Alice had built at the farthest point of her property.  House parties from Waddesdon Manor would drive the four miles for tea, taking a steam launch up the river to the tea house.

Alice’s interest in horticulture was reflected in the variety of gardens she laid out, which included a Dutch, Mexican, rose and wild garden. Around the house, Alice developed 30 hectares of highly ornamental and innovative gardens that rivaled the splendor of Waddesdon Manor. She also created a large kitchen garden.

In 1922 following Alice's death, The Pavilion was inherited by James Armand de Rothschild and his wife Dorothy. From 1922 to around 1939, they let it to the wife of Somerset Maugham who added bedrooms and bathrooms in a wing that later collapsed. In 1950s, the Rothschilds began the proces of giving Waddesdon Manor to the National Trust and moved to the smaller pavilion. The house was improved and modernised; James died in 1957, before the house was ready, although Dorothy later moved to Eythrope. The pavilion is still in Rothschild family ownership. 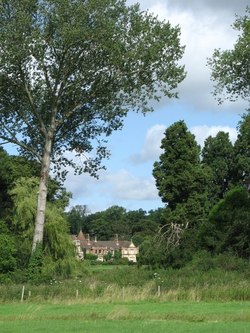