The Château de Pregny, by Lake Geneva, has been a much-loved home of generations of the Rothschild family.

Adolphe Carl von Rothschild (1823-1900) bought the Pregny estate near Lake Geneva in 1857. The original house in the park, the 'villa Grecque d'Auguste Saladin de Lubieres' had been built between 1822-1825 by Luigi Bagutti and was demolished by Adolphe after he acquired the estate. Adolphe added a large area of land to the estate in 1858. He originally intended to employ a well-known French architect’s firm of Claret & Varé to build his château, but eventually entrusted the task to the English architect, Joseph Paxton, who had designed Mentmore, Ferrières and Aston Clinton for other members of the Rothschild family. The château was unusal in Geneva at the time, and marked the appearance of more ostentatious and eclectic private houses. The main entrance was highly decorative, while the façade on to the lake was softened by a central bowed bay.

The park and gardens

Paxton designed the house as well as the conservatories, a Paxton speciality. The aviary and the magnificent glass conservatory which was 50 metres long, covering over a hectare of ground, with fifteen smaller glasshouses opening into it. These were the pride and joy of Julie, Adolph’s wife, who filled them with espalier fruit trees.

The park at Pregny was redesigned under the influence of Adolphe’s wife, Julie, who introduced wild animals and tropical birds. She planned the arrangement and planting of the gigantic trees, emphasising the park’s hills and dales. The Empress Elizabeth of Austria was a frequent visitor to Pregny, where she was enthralled by the wonderful displays of flowers in the greenhouses, and described the garden as "a remote, enchanted world where tame miniature porcupines from Java and exotic coloured birds decorated a private park planted with cedars of Lebanon."

The house passed in 1907 to Maurice de Rothschild (1881-1957), Adolphe’s cousin. It was at Pregny, that Maurice hosted meetings of the League of Nations from 1920 to 1939. When Maurice died, Pregny passed to his son Edmond de Rothschild (1926-1997). The property is still in family ownership. In the 1990s, the glasshouses were presented to the Jardin et Conservatoire Botanique of Geneva. 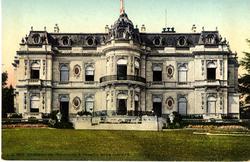