By 1820, The sons of Mayer Amschel Rothschild (1744-1812) had established business operations in London, Paris and Vienna. In March 1821, in support of King Ferdinand I of the Two Sicilies, the Austrian army entered the Sicilian Kingdom and occupied Naples. This event created new business opportunities, and Carl Mayer von Rothschild (1788-1855) was sent to Naples in 1821, where he established C M de Rothschild & Figli to operate as a satellite office of the family business in Frankfurt.

Carl bought the Villa Acton-Pignatelli in 1841 and moved into it the following year. The villa had originally been built by Pietro Valente in 1826 for the English minister Sir Ferdinand (Richard) Edward Dalberg-Acton, 7th Baronet (1801-1837).  He was born in Palermo where his father, Sir John Acton, 6th Baronet, a former Prime Minister of Naples, had been forced to flee in 1806. The neo-classical villa formed the centrepiece of a park, set in full view of the river Chiaia, surrounded by beautiful countryside.

Carl added two floors to house clerks and staff, and the villa became the centre of his business operations as well as the family residence. It was from this base that Carl and his wife, Adelheid (1800-1853), entertained distinguished guests, including Queen Victoria's favourite uncle, Leopold of Saxe-Coburg, who was to become King of the Belgians. C M de Rothschild & Figli became the dominant banking house in Naples, arranging substantial loans to the Papal States, the Kings of Naples, the Duchy of Parma and the Grand Duchy of Tuscany. However, in the 1830s, Naples followed Spain with a gradual shift away from conventional bond issues that began to affect the bank's growth and profitability.

The year 1855 was one of considerable change for the Rothschild family with the death of the heads of both the Naples and German branches. Of Carl's three sons, Mayer Carl (1820-1866) and Wilhelm Carl (1828-1901), succeeded their childless uncle Amschel Mayer von Rothschild (1773-1855) in Frankfurt while Carl's son Adolphe Carl (1823-1900) reluctantly agreed to run the Naples branch. The end of the Naples branch began when revolution broke out and Giuseppe Garibaldi captured Naples on September 7, 1860 and set up a provisional government. Because of the family's close political connections with Austria and France, the business was caught in a delicate position. Adolphe took temporary sanctuary in Gaeta with the Bourbon king Francis II of the Two Sicilies but the Rothschild houses in London, Paris, and Vienna were not prepared to financially support the deposed king. With the ensuing unification of Italy, after forty-two years in business the Naples house closed in 1863.

The villa after the Rothschilds

When the Rothschilds left Naples in 1861, Adolphe Carl sold the villa to the Duke of Monteleone, Don Diego Pignatelli Cortes, with the exception of the two added floors; these remained in the Rothschild family's possession for another ten years. The villa was used by the Jewish community as an oratory until 1867.

The villa passed by descent to Prince Diego Aragona Pignatelli Cortes and his wife Princess Rosina Pignatelli; the couple inheriting the property from the Prince’s uncle. When they took up residency in the villa in 1897, Princess Rosina wasted no time putting her own stamp on her new home. Rosina’s design aesthetic reflected the times and each room on the ground floor was furnished and adorned in an eclectic mix of opulent decorative styles, and filled with the finest art, furnishings, and objects d’art including silverware, bronze statues, French candelabras and clocks, and an eclectic collection of porcelain from around the world. As the wife of the Prince, the daughter of the Duke of Amalfi and lady-in-waiting to Queen Margherita, the villa played host to many society engagements.

Once one of largest cities in Europe and one of its most prosperous, Naples had sunk into a decline of poverty, unemployment, overcrowding and crime after Unification and the ravages of the Second World War.  In 1952, Princess Rosina donated the villa and much of its contents to the Italian State for use as a Museum in memory of her husband, as long as "no object could be extracted to become part of other collections", and today the estate includes the couple’s Villa, it’s grounds, and all of the furnishings, decorations, and art ‘in-situ’. The Red Lounge or Louis XIV Room is the only room that preserves the decorations commissioned by Carl Mayer von Rothschild in the 1850s.  The floor is terracotta painted with faux marble, while the walls are covered with a red damask upholstery that alternates with large mirrors and gilded and carved fixtures by the hand of the designer Giuseppe de Paola.  On the ceiling there is a canvas depicting the Allegory of Architecture by Francesco Oliva (1807-1861), an artist from the Academy of Fine Arts and a court artist who worked on the noble and royal residences of Naples.

In 1960 the villa was acquired by the town of Naples. It is now the museum, Il Museo Principe Diego Aragona Pignatelli Cortes. 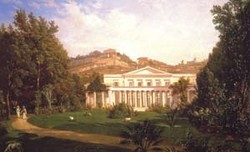