Close ties between the Rothschilds and the Austrian Imperial Government involved Salomon von Rothschild in frequent trips to Vienna. When he was there, the stayed in the Römischer Kaiser on Renngasse, the most luxurious hotel in the city, where Beethoven played in the hotel’s splendid concert hall.

Prevented from buying property by Imperial restrictions on Jewish rights, Salomon, whose visits to Vienna were increasing in frequency, rented a suite on a permanent basis and finally took over the whole hotel.  Here, the sumptuous banquets and balls he staged outshone anything the Austrian nobility could produce.

In 1843, Salomon was made a citizen of Vienna and thus became the only Jew entitled to purchase property.  He bought the Römischer Kaiser, completely rebuilding the hotel and creating more suitable business premises. Metternich’s wife found the hotel "pleasant and attractive" when she dined there. She was much impressed, too, with the collection of antiques which he kept there.

The premises remained unchanged and descendants of Salomon continued to do business from there into the 20th century. 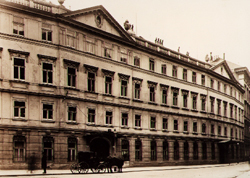