Reichenau an der Rax is a market town in the Austrian state of Lower Austria, situated at the foot of the Rax mountain range on the Schwarza river, a headstream of the Leitha. Originally an ore mining and forestry area, due to its picturesque setting, Reichenau became a summer resort of the Viennese nobility in the 19th century, and its popularity increased with the opening of the Semmering railway line by the Südbahn, with a train station in neighbouring Payerbach, in 1854. Nathaniel von Rothschild (1836-1905) often stayed in Reichenau an der Rax in the summer, where he stayed in the Hotel Fischer. In 1872, Archduke Karl Ludwig of Austria had the Villa Wartholz (designed by Heinrich von Ferstel) built near his favourite hunting grounds.

In 1883, Nathaniel asked the architects Armand-Louis Bauqué and Emilio Pio to design him a country house in Reichenau. Bauqué and Pio, who had trained in Paris, were resident in Vienna from around 1880, who were also involved in the planning of Nathaniel’s villas on the Hohe Warte and in the construction of his Palais in Vienna. They proposed a grand house in the Louis XIII style, using three materials, brick, stone and slate, to create a polychrome effect; it was rumoured that the building was designed so as to put the nearby Villa Wartholz in the shade.

Nathaniel hesitated for a long time over the designs and building progressed slowly. The Viennese construction company Heinrich and Franz Glaser was entrusted with the construction and the Schloss Rothschild, which is surrounded by a 19 hectare park, consists of a main building and a staff wing, each with a different architectural style. The four-wing staff wing with inner courtyard is built in a rustic country house style as a half-timbered building, while the actual castle, a natural and brick building in the Louis XIII style, with its multi-faceted facade and the various dormers, gables and chimneys rising from the strongly structured roofscape, reflected Nathaniel’s influence on the design.

Nathaniel fell out of favour with his father who considered him extravagant and financially irresponsible, and he spent his life as a socialite who built mansions and collected works of art. He built one of the Palais Rothschild at 14-16 Theresianumgasse in Vienna where his large collection of art was on display. After the staff wing of Reichenau was completed, Nathaniel moved into the new building in 1887.

However, in 1889, Nathaniel’s sister Alice (who divided her time between England and France) visited Reichenau and expressed her disappointment with the still incomplete building which she found ugly and not enough like their brother Ferdinand’s house (built in the French château style) at Waddesdon in Buckinghamshire, England. As a result, the Schloss Rothschild at Reichenau, was never finally finished by Nathaniel, who had spent comparatively little time there.

Nathaniel was noted for his many philanthropic and charitable activities and was highly popular with members of Vienna's aristocratic society. Following his sister’s harsh criticism of Reichenau, he resolved to hand the building over to the local township, requesting that it should become a tubercular hospital. The town council feared that this would have an adverse effect on local tourism and the house was ultimately donated to the Austro-Hungarian War Ministry as a home for disabled subaltern officers.

During the Second World War, the Schloss Rothschild at Reichenau served as a rest home for orphans from Potsdam and later as a hospital. It remains in State possession and is partly used for cultural and official events. 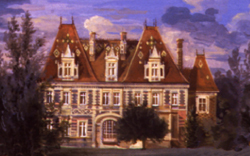