Königstein in Taunus on the outskirts of Frankfurt was built in 1887 for Hannah Mathilde von Rothschild and her husband Willy Carl to use as a summer residence in the later years of their marriage. The villa was designed by the architects Armand-Louis Bauqué and Emilio Pio.

Like other German Rothschild houses, it owed some of its inspiration to Eastern styles, but its setting in vast parklands was in keeping with the style of an English country manor. The Empress dowager Victoria and the Prince of Wales attended the opening. The Empress was a close friend of Hannah Mathilde, and when her husband, the Emperor Frederick III, died in 1888, the Empress had a house built only a few miles away. The two women were part of the same artistic circle and the Königstein visitors' book contains drawings by a number of contemporary artists, as well as dedications from distinguished guests, including Emperor Wilhelm II.

On Hannah Mathilde's death in 1924, the house passed to her son-in-law, Maximilian Benedict Hayum Goldschmidt-Rothschild (1843-1940). He lived in grand style in Frankfurt’s Bockenheimerstrasse, with a vast collection of old masters and Renaissance silver, which he was forced to sell to the state for a fraction of its true value during the war. Although his house was taken from him, he was allowed to remain in it, where he died peacefully in his sleep aged 97 in 1940.

Rudolf von Goldschmidt-Rothschild (1881-1962) inherited his father Max's love of art and studied painting at the Munich Academy. In 1911, he married Betty Lambert (1894-1969), daughter of the Brussels Banker Leon Lambert, and the French Zoe Rothschild. He divorced and remarried in 1923, to Marie-Anne von Friedlander-Fuld of the wealthy Berlin family. Divorced again, from 1936 he spent much of his time with his widowed sister Luci, Baroness von Spiegel, near Vevey by the shores of Lake Leman in Switzerland.

For many years it was a hotel, Der Sonnenhof. Today it is part of the Kempinski hotel group, trading under the name Villa Rothschild Kempinski. 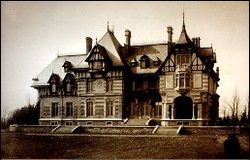