A lodge in Göstling an der Ybbs was built for Albert de Rothschild at the end of the nineteenth century, in a combination of the English cottage style, popular at that time in Lower Austria, and the vernacular style.

In the Göstling region the Rothschild estate provided work for over 600 employees, mainly forestry workers who lived in often very poor conditions in remote areas of the domain. To support the workers the Rothschild family established various social institutions in the region, including the Kinderasyl, established in 1878 by Albert’s wife Bettina, and a home for the elderly in Gaming. The conditions of employment by the Rothschilds were of high standard for the period. Depending on the status of employment, hunters, forest rangers, woodworkers andlumberjacks received different benefits from their Rothschild employers, but every worker was provided at least a shelter or small dwelling which was maintained regularly. They were also provided with a certain amount of firewood and electric bulbs for free. Employees were able to purchase everyday goods at cost price. Even local people who did not work directly for the Rothschild family had the advantages of the social employer, as in wintertime free meals were served to all children of some villages and warm clothes were given out. Above all, the benefit of a secure job with the Rothschilds was most valuable in a scarcely populated area in hard times. In the Lower Austrian region, the name of Rothschild is associated with prosperous and successful business and public social philanthropy.

During the Second World War, the estates in Lower Austria were confiscated. After the war, Louis gave the alpine lands at Waidhofen, Göstling and Hollenstein to the Austrian state, on condition that it used the proceeds to fund pensions for his former employees. 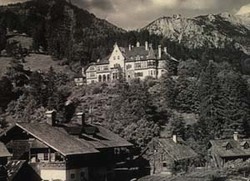