In the Lower Austrian region, the name of Rothschild is associated with prosperous and successful business and public social philanthropy. Albert von Rothschild acquired the Waidhofen and Gaming estates, for use as hunting grounds, in 1875 from Forstindustrie AG, a company in which he already had an interest. The castle at Waidhofen dates from the Middle Ages but was renovated by between 1885-87 under the direction of Friedrich von Schmidt, architect of the Town Hall in Vienna.

Louis von Rothschild inherited the estate from his father in 1911 and it remained in his possession until 1931 when it was given to the Austrian government along with other Rothschild properties to support the Creditanstalt rescue. 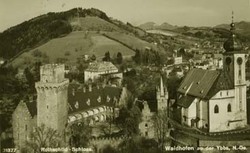