It was in 1853 that the long association of the Rothschild name with great wine began. In 1853, Nathaniel de Rothschild (Nat), the son of Nathan Mayer Rothschild (who had founded the London bank, N M Rothschild) and son-in-law of Baron James de Rothschild of Paris, purchased Château Brane Mouton, an excellent first-growth vineyard, bordering that of Château Lafite, in the parish of Pauillac and the district of Médoc in Bordeaux. He wished to entertain his guests in Paris with his own great wine and renamed the estate Château Mouton Rothschild.

Nathaniel's son James Edouard (1844-1881) inherited it upon his father’s death in 1870, and built a small cottage: Petit-Mouton in 1878, based on the plans of the family's favoured architect Félix Langlais. The cottage consisted of a ground floor and a first floor, in an English style, but the brick and stone materials used evoked the architecture of Louis XIII and the Château des Fontaines, also built by Félix Langlais for James Edouard.

Rejuvenation in the 1920s

After Nat died in 1870, Mouton was left largely unattended until 1922 Philippe de Rothschild (1902-1988), great-grandson of Nathaniel, took on the management of Mouton and brought a new vigour to it with an imaginative style of innovationUnder his inspired and imaginative guidance, Mouton was rejuvenated and taken to greater heights. His bold marketing initiatives, most famously the annual commission to a leading artist to produce an image for the wine labels of Mouton, gave the estate an international standing. In 1973, after a hard-fought campaign he won grand cru status for Château Mouton Rothschild, the first new label to be added to the ranks of the grands crus since the appelation system was set up in 1855.

From 1988 until her death in 2014, Baroness Philippine de Rothschild (1933-2014) presided over Château Mouton. Under her guidance, the company Baron Philippe de Rothschild SA has continued to market premium wines while also expanding successfully into branded wines from around the world. From Château Mouton Rothschild and its neighbouring estates come the five premium wines: Mouton Rothschild itself, Château d’Armailhac, Château Clerc-Milon, Le Petit Mouton and the white wine, Aile d’Argent. To these can be added Opus One from California, a joint venture with Robert Mondavi of the NapaValley, Almaviva from Chile and Domaine de Lambert, a Languedoc vineyard, acquired by the company in 1998.

Château Mouton Rothschild is deservedly regarded as one of the world’s greatest wines, renowned for its outstanding intensity of fruit, concentrated flavour and lingering aftertaste. 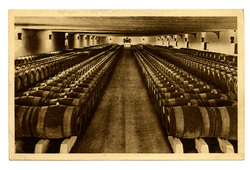