Baron James de Rothschild (1792-1868), founder of the Paris Rothschild bank, was a connoisseur of good wine and equally attracted by the prospect of acquiring a top Médoc estate as an investment.  As early as 1830, James made an offer on the estate but the proprietors were unwilling to sell.  In fact, James had to wait until July 1868 before Lafite came up for auction again.  A reserve price was set at four and a half million francs, with a further quarter of a million for the Carruades. It was not reached. Lafite was withdrawn from sale. It was put up for sale again in Paris on 8 August, with the reserve reduced to 3 million and a quarter of a million for the Carruades. Agents acting on behalf of James de Rothschild, were successful, paying , 4,140,000 francs for Lafite and 300,000 for the Carruades (as much as the earlier sale prices of Mouton, Margaux and Chateau Palmer put together).

A letter from James on 11 August 1868 opens with the words: “Dearest nephews, thank you so much for your good wishes on buying the vineyard.  I hope with God’s help we will be able to drink the wine together in good health.”

His hopes were misplaced.  James died on 15 November, never having set foot on the property. Upon his death, Lafite was divided between his three surviving sons, Alphonse, Gustave and Edmond.  Edmond learned a good deal about wine from the experts at Lafite and subsequently went on to create vineyards in the colonies he founded in Palestine.  But, on the whole, banking left the three brothers little time to devote to the vineyard.

During the Second World War, Lafite was requisitioned by the occupying German forces. Production continued and the stocks of wine were left untouched; it was believed that Goebbels had earmarked them for the celebration of eventual German victory. Meanwhile, the Germans installed electricity for the first time and installed modern plumbing.

It was not in fact, until Elie de Rothschild (1917-2007) took over as chairman of Lafite in 1946, that it began to make a profit. He cared passionately about Lafite, which served to intensify the rivalry between the Lafite Rothschilds and the Mouton Rothschilds, especially when Philippe de Rothschild took over at Mouton in the 1950s.

The shock of nationalization in France in 1981 determined Eric de Rothschild, who had taken over from Elie at Lafite, to take a keener look at Lafite and its commercial possibilities. The result was a reorganized winemaking group, a properly structured business enterprise, operating as Domaines Barons de Rothschilds, under the control of Lafite.  Domaines owns, co-owns or manages Château Duhart-Milon, Château l’Evangile, La Cardonne and Château Rieussec, and abroad it holds 30% of the Chalone wine group with four vineyards in California, a 50% stake in Los Vascos, a Chilean vineyard, and in 1991 they joined with Portugal’s Quinta do Carmo. 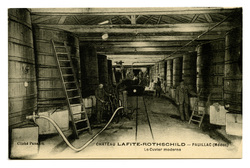