The oldest racing establishment in the world, The Palace House Stable in the heart of Newmarket played a crucial part in Newmarket's history as an equestrian centre in the 1850s and continues to maintain a great sporting tradition today.

The original Palace of Newmarket

By the late 1850s, Newmarket had gone out of fashion as a training centre. One of the relatively few stables in the town that remained in use was Palace House, in which the trainer James Godding was based. Palace House was sold by the Crown to Mayer de Rothschild (1818-1874), the fourth son of Nathan Mayer Rothschild (1777-1836). Mayer was a keen hunter and sportsman, and the first of the English Rothschilds to commission a truly grand residence, Mentmore Towers in Buckinghamshire, where he lived with his wife (a cousin, Juliana Cohen), and their only child, Hannah. For the next fifty years Palace House was the racing headquarters of the English branch of the Rothschild family.

James Godding famously declared that if he could not prepare Macaroni to win The Derby of 1863 at Newmarket, he could not train a Derby winner anywhere. Macaroni duly won the Derby, and within a few years Newmarket was once again thriving. By around 1865, Charles II’s stables were demolished and replaced with the Trainer’s House and King’s Yard stables. In 1867, Mayer commissioned the architect George Devey - a Rothschild favourite - to design alterations to Palace House, including the addition of a dining room and a second floor.

Mayer also established a stud farm at Crafton, near Mentmore, and was a member of the Jockey Club. One of his most successful horses was Hannah, (trained by Joseph Hayhoe)and 1871 this horse completed the English Fillies' Triple Crown, winning The 1000 Guineas, The Oaks and The St. Leger.

When Mayer died in 1874, the Palace House estate was inherited by his nephew, Leopold de Rothschild (1845-1917). Leopold made his Newmarket home in Palace House, and between 1896 and 1903, The Rothschild Yard and Stables were constructed, King Edward VII frequently dined with Leopold. At Leopold's invitation, the American banker and Rothschild agent in the United States, August Belmont, kept his horses at Palace House.

Leopold raced as 'Mr. Acton' during his early years of ownership, and it was under that pseudonym that he won The Derby with Sir Bevys in 1879. His horse St. Frusquin won the 2,000 Guineas in 1896 and Doricles The St. Leger of 1901. Leopold's most famous success came in 1904, when St. Amant won The Derby.

Leopold died in 1917, and the Palace House estate passed into the hands of his son, Anthony de Rothschild (1887-1961). Among the horses he inherited was the yearling Galloper Light. Pillion won The 1,000 Guineas for Anthony in 1926. In 1934, the trainer Jack (later Sir Jack) Jarvis, leased Palace House from the Rothschilds, using the Stables as his second yard (his first yard was Park Lodge).

During the Second World War, Anthony personally committed significant resources to assist Jewish refugees from Europe. Refugees were housed in Palace House during the war. In 1947, C H ‘Harry’ Jellis used the Palace House Stables to train privately for the Hon. Dorothy Paget, while also acting as assistant trainer to Jack Jarvis. The Yard reverted to Jack Jarvis in 1954.

In 1992, the Palace House estate, by now in a poor condition, was purchased from its new owners by Forest Heath District Council with the support of English Heritage. Between 1992 and 1998 with the support of the Heritage Lottery Fund and English Heritage, Palace House was restored by Freeland Rees Roberts architects. In 2004, Forest Heath District Council established the Home of Horseracing Trust as an independent charitable trust in order to co-ordinate fundraising for a future redevelopment project.

The British Sporting Art Trust (established in 1977 to promote interest in sporting art and to build a representative collection for public exhibition), occupies the beautifully restored Palace House.

The National Horseracing Museum tells the story of 'the sport of Kings' and occupies the former Trainer's House and King's Yard, together with spectacular new galleries.

Based in the Rothschild Yard, Retraining of Racehorses is British horseracing’s official charity for the welfare of horses who have retired from racing, and visitors can see these beautiful animals at close quarters, in Stables originally built by Leopold de Rothschild. 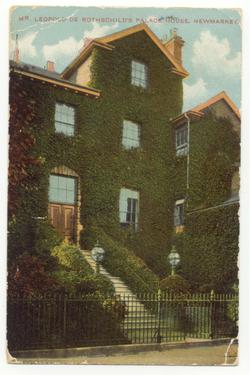