Originally part of the Exbury estate, Inchmery House, built about 1780 as a Dower House for Exbury House, has its own beach and overlooks the Isle of Wight and the Solent.

The Manor of Exbury was held by the Berkeley family and then the Comptons, who held it for 200 years. In 1718 they sold it to William Mitford. Henry Reveley Mitford, father of the 1st Lord Redesdale, sold the estate in 1879 to the Forster family. The property was later inherited by Harry Forster, an MP, (later Lord Forster of Lepe and Governor-General of Australia).

Lionel de Rothschild acquired the Inchmery estate in 1912 (the year he married Marie-Louise Beer (1892-1975) as the intended centre of a garden of grandiose proportions. When his uncle Alfred (1842-1918) died, he left him Halton, near Wendover, along with other properties; Lionel subsequently sold Halton to the Air Ministry, and in 1919 he bought the entire Exbury Estate. Proposed changes to Inchmery House were shelved and Exbury House was remodelled for the Rothschild family and Lionel set about creating the famous azalea and rhododendrons gardens at Exbury.

During the 1930s, the Hon. Mr. and Mrs. Denis Berry, Lionel's daughter and son-in-law acquired Inchmery House. In 1942, the entire Exbury estate was it was requisitioned by the Admiralty and became HMS Mastodon remaining as such until 1955. In 1943, Inchmery House was the base for the Bardsea operations during the Second World War. After the war, the house was returned to Lionel's son, Edmund de Rothschild (1916-2009), where he lived with his wife and family whilst Exbury House was once again renovated.

The Rothschilds sold Inchmery House in 1997. 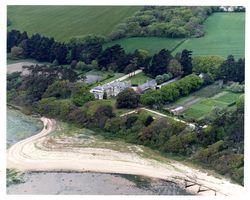