On the recommendation of their friend, Lord Suffield, an estate with two small villas was purchased by them and a young up and coming architect, Edwin (later Sir Edwin) Lutyens was engaged to design a mansion. In 1888, The Pleasaunce was built with gardens designed by the famous garden designer Gertrude Jeckyll. The Pleasaunce cost £70,000 to build.

The name ‘Pleasaunce’ was suggested by Lord Morley to Lord and lady Battersea: “A Pleasaunce is a medieval word meaning a garden with open walkways where ladies and gentlemen may take the airs.”

Cyril Flower was MP for Brecon, and then Luton. In 1892, he was created Lord Battersea, taking his title from the area of London where he (and earlier his father) had developed property. He was offered the post of Governor of New South Wales, which he declined. Cyril and Connie had no heirs, and in 1936 the property was sold and was purchased for a fraction of the original cost (owing to the perceived risk of coastal erosion) by Lancs and Cheshire Federation Christian Endeavour Holiday Homes. The House was officially opened on 22 May 1937 by Jean McKellen, granddaughter of Mrs McKellen, who had originally estabslished the first Christian Endeavour Holiday Homes. From 1937, the property was continually in use by CEHH Ltd, (now CE Holiday Centres Ltd), except when requisitioned by the military for use during the Second World War. 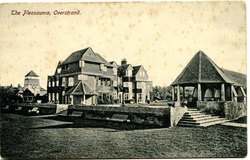