House of the Green Shield, The Judengasse, Frankfurt, Germany

The Jews of Frankfurt were required to live apart from the Christians in a single narrow lane called the Judengasse, or Jews' Alley. The street was overcrowded. The 3,000 Jewish inhabitants were locked into this ghetto on Sundays, Christian holidays, and at night. Frankfurt's Jews could not enter a public garden, visit a coffee shop, or walk more than two abreast in the street. Although other eighteenth century German cities imposed restrictions on Jews, none were as harsh as those of Frankfurt.

The House of the Red Shield

Mayer Amschel Rothschild (1744-1812), the son of Amschel Moses Rothschild and Schoenche Rothschild, was born in Frankfurt, the fourth of eight children. His father was a moneychanger and dealer in silk cloth. The family surname was derived from the house where a Rothschild ancestor, Isaac Elchanan (d. 1585) lived in Frankfurt. At the time, it was a common practice to give names to houses (such as White Tulip, Ship, Green Jar, etc.). Elchanan's house was called 'zum Roten Schild' (at the Red Shield), from which the name Rothschild was derived. In 1664, Isaac's grandson Naftali left zum Roten Schild and moved to a house called Hinterpfann, meaning house at the back of the sauce pan, but kept the Rothschild surname.

The house of the Green Shield

Frankfurt was a major center of trade, with many bankers and wholesale merchants. At the end of his apprenticeship, Mayer Amschel returned home to Frankfurt. There he joined his brother Calmann's money-changing business, adding his own specialty to it, a trade in rare coins, medals, curios, jewels, engravings, and antiques. Through this business Rothschild was introduced to Crown-Prince Wilhelm, the future Landgrave (Prince) of Hesse, heir to a huge fortune. In 1769, Rothschild requested of Wilhelm the title of court-factor, or crown agent, meaning that he had done business with royalty. The honorary title allowed Rothschild to hang a shield decorated with the arms of Hesse and Hanau on the door of his house.

On August 29, 1770, Rothschild married Gutle Schnapper, the 17-year-old daughter of a bill broker, moneychanger and court factor to a small principality. The following year, she gave birth to Jeanette, the first of their ten children. By 1784, the family had grown to include Amschel, Salomon, Nathan, Isabella, Babette, Carl, Julie, Henriette and James, and, aged forty, Mayer was prospering. When a larger house became available in the Judengasse, he bought it. The House at the Green Shield contained a water pump, considered to be a great luxury at the time.

With the help of sons, Salomon and Amschel, the family became a major wholesaler of wool, cotton cloth and flour, and in the mid-1790s, Rothschild became a major importer of cotton cloth from England. In 1796, Napoleon's troops attacked Frankfurt, accidentally setting the Judengasse on fire and destroying half of it, leaving 2,000 inhabitants homeless. The displaced Jews were allowed to live in the Christian part of the city for six months. Although the House at the Green Shield had not been damaged, Rothschild took advantage of the relaxed city laws to rent space for all of his wares outside the ghetto, allowing his family full use of the house.

In 1810, Mayer Amschel reorganized his business, making his grown sons full partners, but retaining for himself a decisive vote. Now in poor health, he allowed his sons to run the business, while he relaxed and studied English. On September 19, 1812, Mayer Amschel died in Frankfurt, leaving the business he had created in the hands of his sons.

At the end of the 19th century, most of the buildings in the Judengasse were demolished, but the former Rothschild house of the Green Shield remained as a museum. The area suffered major destruction during the Second World War, and reconstruction has left no visible signs of the Judengasse and the historic Rothschild home in today's townscape of Frankfurt. 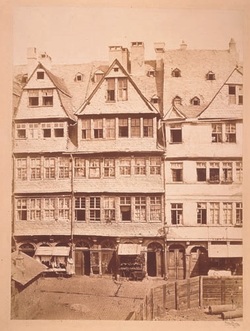